Luz Pereira: It’s All in the Timing

Hands clap and skirts fly, as feet shuffle and stomp against the heavy backbeat of the cajón, an Afro-Peruvian box drum. A dance of flirtation and courtship, the Marinera Limeña, is known as the national dance of Peru. A mix of African, European, and to a lesser extent indigenous sounds and movement styles, the dance is done in pairs, where the male pursues the ever-provoking female. The man follows the woman who enticingly waves her handkerchief as the couple moves together, and then apart, employing playful steps that accompany the graceful guitar/cajón derived music.

A master of the Marinera Limeña as well as a plethora of traditional Peruvian dance styles, Pachamama Peruvian Arts assistant director and dance teacher Luz Pereira, can certainly attest to the importance of timing in dance instruction and performance. “One of the hardest parts of teaching the young children the dance steps” Luz notes, “is getting them to understand the music within their bodies.” Despite any organic challenges however, Luz and the other PPA instructors have been overwhelmingly successful in their quest to pass on folkloric Peruvian music and dance traditions to their young students.

As I sat with Luz in the CTMD conference room, talking about her early life in Peru and experiences with the PPA project, it became apparent that she has been blessed with impeccable timing, both on and off the dance floor. Glowing with enthusiasm, Luz told me of her experiences traveling throughout Latin America, working in Peru on the front lines of its folklore revival, and disseminating cultural traditions on the international scale post-immigration to the USA in the 1980s. “I really feel so lucky to have been where I was at the times I was there” Luz comments, “because it was truly one of the best times for me, and in my opinion, for Peru.”

Family History and the Early Years
Able to trace her family history quite far back, Luz explained that her grandfather on her father’s side came from Portugal via the Amazon region, then moving to the North of Peru. There he married a Spanish woman (Luz’s grandmother), and several years later, Luz’s father was born. At age 17, her father was sent to Lima, Peru’s capital city, to continue his education. Later, working as a governor, he traveled around the country to report on regional activities. Incidentally, he was sent to a farm in Ayacucho, owned by Luz’s grandfather on her mother’s side. There he met Luz’s mother. Soon after, they married and settled in Lima, where Luz was born on April 6, 1938.

Bitten by the dancing bug at an early age, Luz started studying in grade school where her teachers encouraged her to pursue the art form in earnest. She took classes in Spanish dance and excelled to the point of being offered a fellowship to go to Spain for further training. Her father was opposed however, and discontinued her dance classes for a time, in hopes that she focus solely on her academic studies.

As a child, Luz traveled extensively with her family to the various departments of Peru in which her father was stationed. It was as a result of these trips that she developed a keen interest in Peru’s geographic and cultural diversity. Luz remembers one of her earliest vacations quite vividly. It was her first experience in the Peruvian highlands and she observed individuals from Indigenous communities involved in field work and agriculture for the first time. “I’m glad I had that experience,” Luz notes, “because it was that specific day that sparked an interest in me, for the many cultures that existed within my country.”

Luz attended private schools where she studied English and later on, business administration. After receiving her degree she was encouraged to work for the International Center of Labor’s Center for Public Health (a collaborative project with the USA). At the same time she began receiving offers to work abroad for centers of international business. Given her young age however, her father suggested she remain in Peru and go abroad after obtaining more work experience.

With the prospects of travel just over the horizon, Luz decided it was important to learn more about Peru’s rich cultural heritage. Re-connecting with her love of dance, she decided to study the Marinera Limeña, so as to have something “authentically Peruvian” to demonstrate overseas. She was also lucky enough to embark on an extensive road trip that took her across Peru’s varied topography, through the Andes, highlands, jungle, and desert.

The Dance Career Begins
Luz began to study Marinera Limeña in the 1960s, just as the great push for a folklore revival hit the Peruvian populous. Luz mentions, “I, like other Peruvians, saw that our neighbors, Bolivia, Chile, Colombia, Brazil, all had a strong tradition of folkloric performing arts. We felt bad that Peru was so underdeveloped in that area. I personally wished Peru had more to show for its cultural diversity, but before that time, no one appreciated our folklore, our traditions coming from Indigenous, African, and Criollo communities.”

Luz took classes at Peru’s College of Folk Music and Dance in Lima. The College was one of the first schools in Peru to formally recognize the value of Peru’s traditional music and dance. Quickly noting her talent as a dancer, her instructors suggested that she learn the full curriculum, which included Indigenous and Afro-Peruvian dances, as well as those from the Limeñan Criollo tradition. Luz graduated from the four-year program in 1962 with a certificate in music and dance education and a completed thesis on the music and dance of the Incas. She then worked alongside her teacher and mentor, Rosalita Figueroa, to appeal to Peru’s Congress for funds to help support the traditional arts and develop the College into a National Institute.

Still balancing her administrative career, Luz worked as an instructor of traditional Peruvian dances, and joined a performance group, Perú Canta y Baila, made up of graduates of the National Institute. The group toured the nation, competed abroad, and gave workshops with folkloric companies from various countries. In 1965, Luz competed with four other couples from the company in the Festival Latinoamericano de Folklore in Argentina. Perú Canta y Baila performed amongst some of Latin America’s best traditional dance troupes and won first place. This was a momentous achievement that put Peru’s folkloric traditions on the map for the first time. Luz looks back on her years studying with Figueroa, and performing with Perú Canta y Baila with fondness. She notes that she entered the folklore scene at the most favorable moment. “I had the opportunity to study with some of the best teachers, and to be a part of a cultural revival. It was really a special time in history, and I was lucky enough to be there to see it all happen” says Luz.

Coming to New York
In 1971, after considerable recruiting, Luz joined the United Nations working for the Reproduction Branch of the Population Fund. She moved to New York, and worked in International Relations for nearly 30 years. Luz notes that she came to New York at time when South American music, Andean music in particular, was becoming very popular. Consequently Luz had the opportunity to continue her career in, and passion for, traditional Peruvian arts. In 1977, she was asked by Guillermo Guerrero and Pepe Santana to join their performance ensemble, Tahuantinsuyo.

During the 1970s Tahuantinsuyo was one of the only music/dance groups to perform Andean traditions. Luz joined the ensemble as a Peruvian dancer and collaborated with Guerrero and Santana for many years. The group toured the US and Canada cultivating an appreciation for the sounds and styles of the Andes. Luz performed in such notable venues as Lincoln Center and Carnegie Hall. She also led dance workshops in many universities and schools in New York. When Guerrero and Santana parted ways, Luz went on to perform with Santana’s group Inkay for several years.

Pachamama Peruvian Arts
Luz joined forces with CTMD and Pachamama Peruvian Arts in 2004. Recommended by Santana, she started as a dance instructor and then became the assistant director of PPA putting her seasoned administrative skills to good work. Luz sees her work with PPA as a continuation of her cultural activities in Peru and New York, but with new opportunities and challenges. “I was retired when they asked me to join Pachamama” Luz notes, “and so it was the perfect time for me to get involved in the arts again.”

Luz explains that when working with PPA, she always teaches the basic dance steps exactly as they were taught to her by Figueroa, back in Peru. When choreographing for the children, she stays as close to tradition as possible; however recognizes the necessity to adapt the pieces for her young students and allow for artistic fluidity in a new and modern environment.

Luz notes her admiration for the PPA, and how successful her work has been with the program. She sees her purpose as that of giving back to the Peruvian community here in New York; teaching children about their roots in a free and safe environment. “The children born here may know little about their culture and history” Luz explains. “This is a serious program with good teachers, and it is free!”

Luz sees music and dance as a powerful communicator of culture that can bring people together “without too much pressure.” She elucidates that the arts even attract the parents to become more involved in what their children are doing. Luz’s personal history has provided her with many opportunities in the traditional arts. She now feels lucky to be involved with PPA and to be able to pass on what she has accomplished. “I want to leave a good legacy,” Luz says, and PPA is certainly lucky to have such a talented and experienced committee member to do the job. 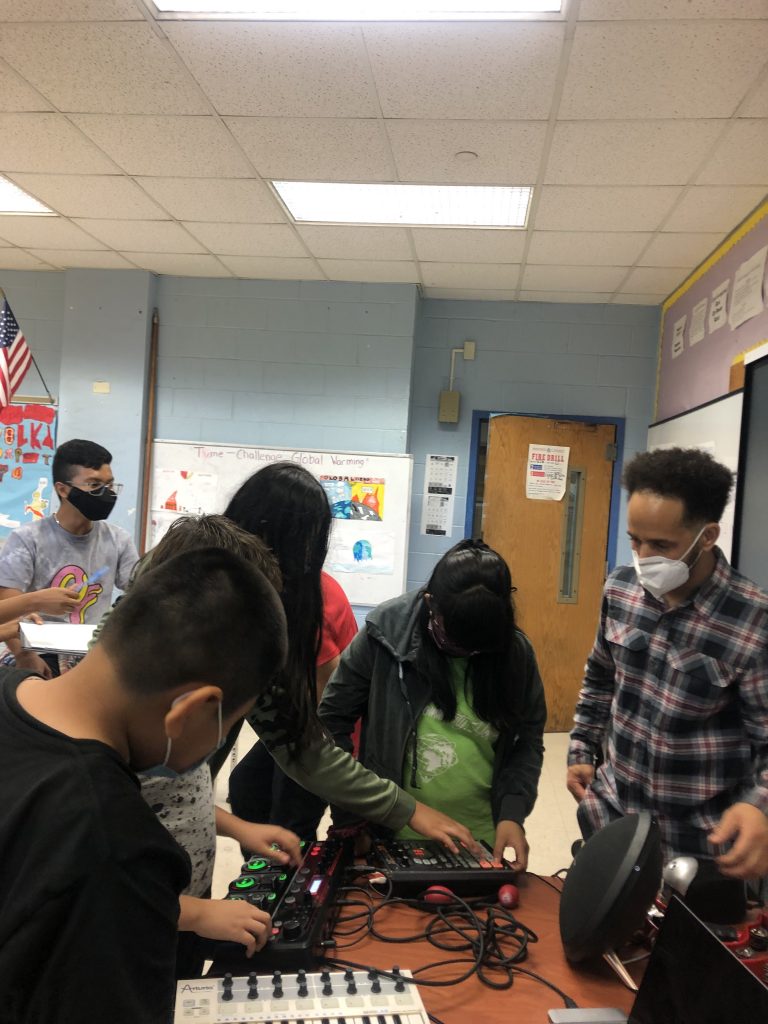 A Successful Semester for the FolkCOLOMBIA School!

A Congratulations is in Order!